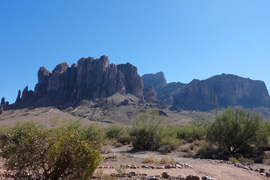 But Arizona lawmakers slashed funding for state parks during the recession and show no intention of healing those cuts.

That’s a disconnect of colossal proportions.

A Gallup Arizona poll released by the Center for the Future of Arizona in 2009 found that “the state’s natural beauty and open spaces are seen by citizens as our greatest asset.” Nearly two decades earlier, Arizona voters overwhelmingly voted to create the Heritage Fund to dedicate proceeds from the Lottery to state parks and the Game and Fish Department.

Today, no general-fund money goes to state parks. The parks’ share of the Heritage Fund money has been eliminated, and a bill in the Legislature would further limit the funds available to run state parks.

“Parks are limping along right now,” says Walter “Bill” Meek, president of the non-profit Arizona State Parks Foundation, which works to preserve, promote and enhance state parks. He says partnerships with cities and counties that have helped keep parks open are in jeopardy as municipalities face budget woes.

Meanwhile, two bills — House Bill 2178 and Senate Bill 1286 — that would re-establish the parks portion of the Heritage Fund are not expected to make it out of the Legislature. Last year, a parks’ Heritage Fund-restoration bill never got out of committee.

Another bill — HB 2601 — would redirect money from the State Lake Improvement Fund that Meek says has been helping run the parks. It passed committee last week.

How bad are things for parks’ funding? In 2009, Arizona State University’s Morrison Institute for Public Policy estimated it would take $30 million to $34 million a year to operate and maintain the current system of 32 state parks and natural areas. The total agency operating budget for fiscal 2014 is $22.46 million, according to the Arizona State Parks fiscal 2012-13 annual report.

This disconnect between what the public wants and what the politicians do is not just an Arizona thing. Colorado College’s recent “State of the Rockies” poll found that residents of Colorado, Montana, New Mexico, Utah and Wyoming, as well as Arizona, expressed deep love of the public lands and a strong desire for the agencies that manage them to be adequately funded.

This is particularly striking in a region known for criticism of the federal government, yet support for federal land and federal land-management agencies was strong regardless of party affiliation.

Westerners treasure the public lands that celebrate the spirit and beauty that is as vast and liberating as our endless horizons.

So, what’s with the politicians?

Congress and the Arizona Legislature need to recognize that the public’s love of parks and open spaces is not a casual or passing fancy. It’s a deep commitment that has held strong and steady over many years.

Support for public lands should reflect that profound and enduring fact. [Source: Tammy Gray-Searles, AzJournal.com, 11-27-2009]  —  “It is our judgment that the state parks system is in imminent danger of complete collapse as a result of financial starvation during most of this decade,” wrote the members of the state task force on sustainable parks funding in their Oct. 30 report to the governor.  The task force was asked to find ways to keep Arizona state parks open.  In the report, the group recommended implementing a $14 to $15 fee to vehicle registrations that would be dedicated solely to state parks, ensuring enough funds for both, maintenance and operations, as well as infrastructure and capital improvements.

“…our chief recommendation is that the state should implement a Sustainable State Parks Fund, which would be financed by a $14 to $15 annual contribution to be collected from owners of non-commercial vehicles as a part of the vehicle registration process,” the recommendation notes.  “The proceeds would be dedicated to the operation, maintenance and capital needs of state parks.  In return, private vehicles bearing Arizona license plates would be admitted free to state parks.  The enactment should include a provision to allow individual license holders to opt out of paying the surcharge, so it would not burden those who are least able to afford higher expenses.”

According to the task force report, as well as a separate report prepared by the Morrison Institute, without a drastic change in funding, all of Arizona’s parks are in danger of being shut down.  [Note: To read the full article, click here.]