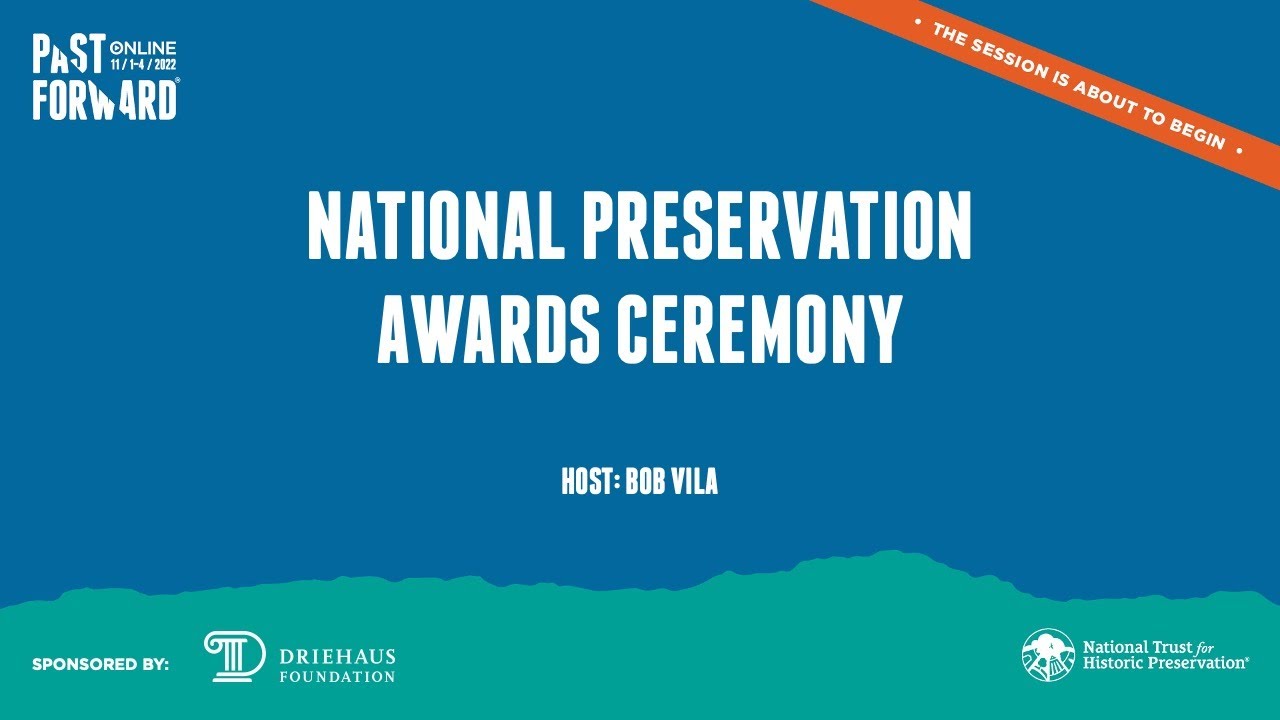 The Arizona Preservation Foundation is honored to receive the 2022 John H. Chafee Trustees’ Award for Outstanding Achievement in Public Policy from the National Trust for Historic Preservation. APF has been a long-standing partner of the Arizona Heritage Alliance and we are mentioned in the following video.  On YouTube, the AZ segment starts at the 7 min. mark: https://buff.ly/3NDOCap

Today, the Office of Governor Doug Ducey announced an award of $4.6 million to the City of Bisbee for the restoration of Camp Naco in nearby Naco, Arizona. The nationally significant, hundred-year-old adobe military camp sits just 600 yards north of the US-Mexican border. In May of this year, this site was named as one of America’s 11 Most Endangered Historic Places by the National Trust for Historic Preservation.

“Arizona’s Camp Naco is a significant piece of the Southern Arizona community and an important reminder of our past,” said Governor Doug Ducey. “The pandemic was hard on our tourism industry and these funds will help preserve a piece of our state’s history for generations. We must remember the honorable service of the Buffalo Soldiers and the part they played in securing our southern border at the turn of the 20th century.”

“The City of Bisbee, the Community of Naco, the Naco Heritage Alliance and our many partners are honored to accept this valuable assistance from the Arizona Governor’s Office. We have been working for twenty years to preserve the Camp, and now we will be able to continue some much-needed restoration of these historic buildings and tell the fascinating story of this place. Much of our momentum was lost as a result of the pandemic and we are eager get moving again. The result will be a living museum of Buffalo Soldier History, the Mexican Revolution and a place for tourism, arts and culture. It will also create a sense of place and provide more community resources in Naco.” said Steve Pauken, Bisbee’s City Manager. 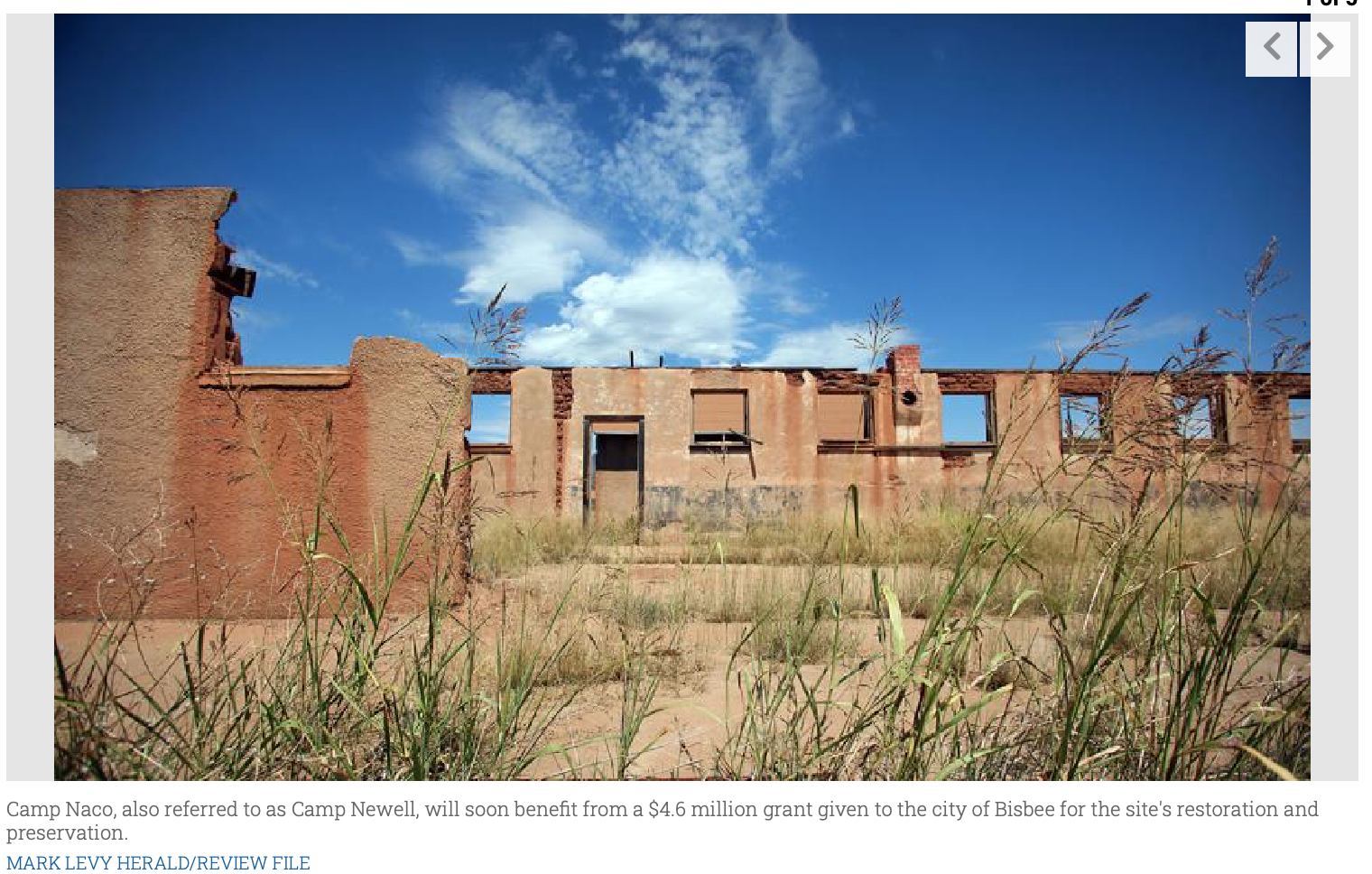 Recognizing the significance of Camp Naco and its contributions to the area, Bisbee Mayor Ken Budge observed, “Camp Naco and its cultural and military importance are valuable assets to our community and the region. We cannot allow this iconic place to melt back into the desert. We hope this listing will renew interest from regional, state and national interests who see the value in protecting this place and converting it for needed community resources.”

“Camp Naco is an important physical reminder of the legacy and contributions of African American Buffalo Soldier regiments who—in spite of serving in a segregated military—protected America’s economic and political interests as the railroads expanded westward and Mexico experienced political unrest in the early decades of the 20th century,” said Katherine Malone-France, Chief Preservation Officer of the National Trust. “With support and partnerships, Camp Naco can once again play a critical role by providing needed community and educational services while highlighting the full history of the many peoples who have shaped this region.”

Camp Naco is a touchstone for the history of the Buffalo Soldiers and the proud tradition of Black military regiments after the Civil War. Constructed by the U.S. Army in 1919, these adobe buildings are the only ones remaining from the 35 permanent camps built during that time along the U.S.-Mexico border. After the camp was decommissioned in 1923, the site passed through multiple owners and has suffered from vandalism, exposure, erosion and fire. The City of Bisbee now owns Camp Naco and is working closely with the Naco Heritage Alliance, Buffalo Soldier organizations and other partners to identify critical funding that will help restore the historic camp buildings and revive them for community, tourism and educational uses.

The Camp’s fragile adobe barracks and officers’ housing embody the story of the U.S. Government’s early twentieth-century efforts to protect the Border, when the 9th and 10th Cavalry, known as the “Buffalo Soldiers,” helped to stabilize the U.S.–Mexico border area during the Mexican Revolution. Over the last decade, growing recognition of the importance of the segregated African American military has fostered new interest in the site. Rebecca Orozco of the Naco Heritage Alliance, an advocacy organization founded in 2008, said, “This funding is an important step in recognizing the need to preserve this nationally important historic asset.” Orozco continued, “It will support the City of Bisbee’s proposed adaptive reuse of the site into a community center to serve the rural community of Naco and to support heritage programming, visitation and tourism in southern Arizona.”

Charles Hancock of the Southwest Association of Buffalo Soldiers shared the feelings of Buffalo Soldier organizations throughout Arizona when he said, “Camp Naco symbolizes the honorable service these men provided to our country. Once repaired and back in service, it will continue to celebrate their legacy and share their proud history with future generations.”

The City of Bisbee acquired the property in 2018, working closely with the Naco Heritage Alliance to protect this important piece of Arizona and national history by stabilizing the 23 buildings, repairing damaged roofing, and hiring specialists to advise on adobe restoration. To begin bringing Camp Naco back as a community asset, they hope to rehabilitate the former Officers’ Club and the Hospital Building to create classroom and public meeting space for the community, share a museum dedicated to the Buffalo Soldiers stationed here, and restore the Parade Grounds as an outdoor space for a wide range of community events.

Helen Erickson, University of Arizona faculty member and board member of the Naco Heritage Alliance, has worked over the past year with Arizona Humanities funding support to develop an interpretive website and story map for Camp Naco. 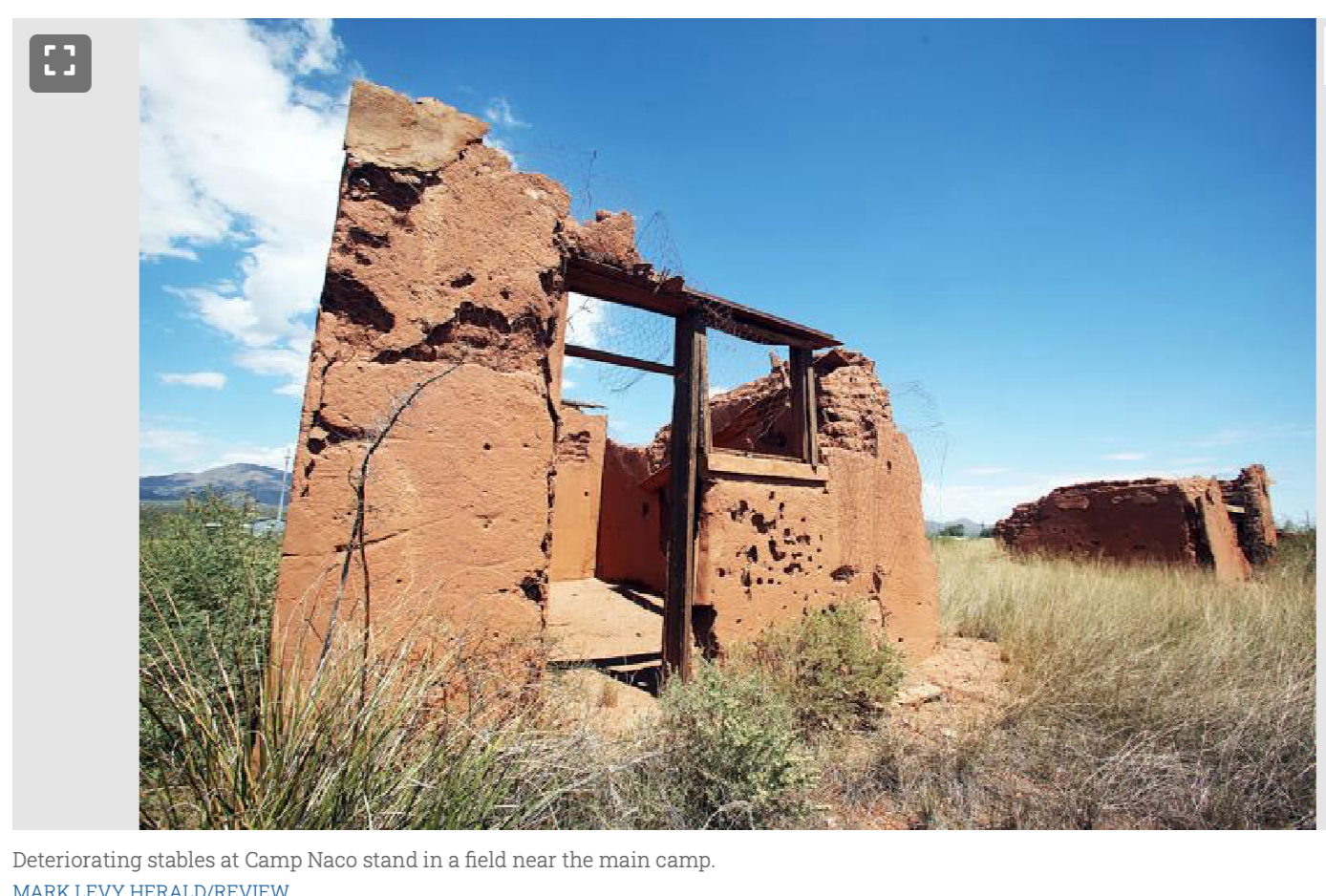 At the Arizona Historic Preservation Conference this month, the Story Map won the Governor’s Award for Heritage Preservation and the James W. Garrison Grand Award. She noted, “Because of the fragile nature of mud adobe construction and the location of Camp Naco along this international border, without intervention and a new use for this remarkable place, this essential piece of borderlands history will be lost. We must act now.”

Jeffrey Jennings, Deputy to the Commanding General at Fort Huachuca said “Camp Naco is a vital part of the US Army’s history in the Southwest. Protecting the Southern border was an early Army requirement which brought cavalry Soldiers, including the famous “Buffalo Soldiers” to the Arizona Territory. From the Punitive expedition to the battle of Ambos in 1918, the US Army and Buffalo Soldiers have figured prominently protecting southern border from attack. It is important we preserve our southwest history through these important historic sites, and through the eyes of those men who served. Buffalo Soldiers, like those of the 10th US Cavalry who fought in both engagements mentioned above were fighting the enemy and discrimination of the early 19th century must be honored and remembered”

The Arizona Lottery and Arizona State Parks are excited to announce a partnership aimed at encouraging all Arizonans, and Lottery players in particular, to get out and visit a variety of our state’s amazing state parks through a new Arizona Adventure Scratchers® ticket and adventure-based promotion. 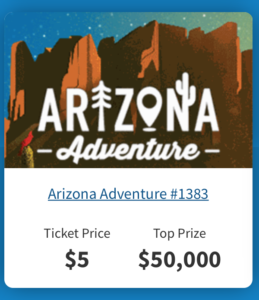 backdrop of three iconic landscapes, a geo-located adventure experience at 12 Arizona state parks, and the chance to win a share of $1 million in cash and Arizona travel prizes.

“We’re bringing a sense of adventure to our players, offering more chances to win and explore the beauty of our great state, ” said Gregg Edgar, Arizona Lottery Executive Director. “Coming out of the pandemic, it’s clear that Arizonans are looking for fun ways to connect with family and friends and, with Arizona Adventure, we’re offering a chance to get out, explore and win big this year!”

Players can go to the Arizona Adventure website, www.AZAdventure.com, to learn about the various “adventures” at 12 different Arizona state parks, get directions, and then embark on their self-guided adventure. Once a player reaches the coordinates of the park destination of their choice, they can “Check-In” on the Arizona Adventure website to receive ten entries into Arizona Lottery promotional drawings for cash and travel prizes.

For those who want to adventure closer to home, players can purchase the limited-time-only, Arizona Adventure Scratchers ticket at 3,000+ Arizona Lottery retailers across the state. This new $5 ticket gives players an opportunity to win a $50,000 top prize, plus each Arizona Adventure ticket entered into the promotion will receive five entries for a chance at the grand prize of $200,000 and an Arizona travel package. Players can also enter other eligible $5 Scratchers and Fast Play tickets for a single entry into the promotion.

“We are so excited to partner with the Arizona Lottery on the Arizona Adventure tickets,” said Bob Broscheid, executive director of Arizona State Parks and Trails. “You can plan your next adventure in one of Arizona’s state parks, and then enter to win even more prizes. It’s a great reward on top of an already amazing outdoor experience.”

You can learn more about Arizona Adventure, participating Arizona state parks, eligible games, and the exciting cash and experiential prizes available to players at www.AZAdventure.com.

About Arizona State Parks
For information about the more than 30 Arizona state parks and natural areas, the trails and Off-Highway Vehicle Program and State Historic Preservation Office, call 1-877-MY-PARKS or visit www.AZStateParks.com.

Center for the Future of Arizona Electronic Newsletter:  August 2022

Electing leaders aligned with Arizonans’ values relies heavily on participation. The more Arizonans are involved, the closer we can get to electing leaders

who represent most Arizonans, their ideas, and their collective interests.The Arizona Voters’ Agenda shows that the majority of voters care about and agree on many issues and actions critical to our state’s future. They want to hear candidates discussing the priorities outlined in the Agenda when considering whom they will support with their vote.

Together, we can center the priorities of Arizona voters in our elections. Browse our suite of materials on the Arizona Voters’ Agenda– a data-driven guide to what the majority of voters prioritize and want to hear from candidates– to support your conversations, moderated forums, social media, and more.

We can all encourage productive political dialogue and participation in the upcoming General Election among our networks. Download and share Arizona voters’ priorities and what candidates should address as they compete for votes.