Plans to expand and improve Arizona’s state parks system are under review as key projects face delays and cost increases.

The projects are drawing new scrutiny in the wake of complaints that led to the ouster of Arizona State Parks and Trails director Sue Black. The agency’s current leadership is reviewing all projects to determine their viability and to ensure all permits and clearances are secured properly, interim director Ted Vogt wrote in a Nov. 30 report to a legislative oversight committee.

The committee is scheduled to review the park projects Tuesday.

Vogt was appointed to head the agency in November after Gov. Doug Ducey fired Black following numerous complaints, including ones by former staffers who said potential archaeological sites were bulldozed to rush development of rental cabins and other improvements.

Only 25 of the 100 cabins planned for various parks through lease-purchase agreements have been installed yet the project’s $1.6 million budget is nearly expended, the report said.

This photo from state Parks documents shows land at Havasu Riviera State Park that was bulldozed. Former Parks archaeologist Will Russell said the state agency might not have followed protocol in determining if archaeological sites were disturbed. (Photo: Arizona State Parks Department)

In a Dec. 11 briefing memo that accompanied the report, legislative budget analysts wrote the shortfall in cabin development was “due to higher-than-expected site preparation costs.” The parks system’s report said the agency is evaluating the cabin project scope based on its recent experience installing the cabins at Lost Dutchman, Patagonia and Lake Havasu parks.

Meanwhile, the planned $4 million development of a new rustic camping park known as Rockin’ River Ranch along the Verde River in Yavapai County is lagging. Parks officials said they can’t accurately determine a construction schedule until completion of designs and, before those, a cultural resource assessment of the property.

Elsewhere, plans given an informal go-ahead by lawmakers in 2016 to redevelop camping sites and recreational vehicle stations at Cattail Cove State Park on Lake Havasu along the Colorado River at a cost of $5.3 million are in a holding pattern as parks officials develop the project’s master plan.

The parks report states the scopes of numerous other improvement and repair projects throughout the park system have changed due to various circumstances, including funding constraints.

Of 13 small projects funded with appropriations in the two fiscal years that ended in mid-2017 and mid-2018, only four are complete, legislative budget analysts said.

Opinion: Not all the problems at Arizona State Parks happened on Ducey’s watch. But the remedy is up to him. 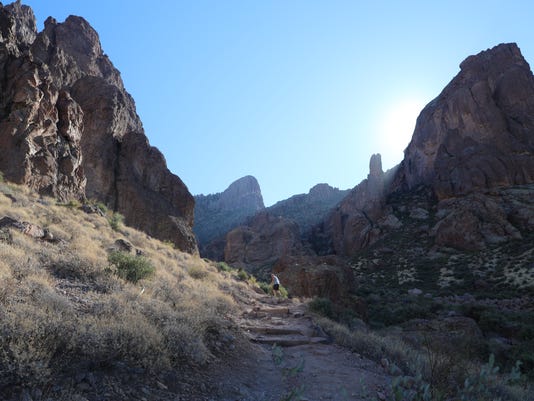 Ducey can turn it into a love letter to all of Arizona and a down payment on his legacy.

The constituent letter comes from the Arizona Heritage Alliance, an impressive group of people who know and care about our state’s remarkable cultural, historical and natural treasures.

The letter asks Ducey to restore $10 million a year in Heritage Fund money for Arizona State Parks & Trails. The funds were taken away in 2010.

And heaven knows Arizonans wanted the Parks to have the money.

The letter reiterates how this money was used under the plan spelled out in the citizens’ initiative:

The last one is of particular interest.

It came after years of complaints about Black’s management.

It also came as Arizona Attorney General Mark Brnovich continues investigating whether laws protecting Native American and other archaeological sites were ignored on Black’s watch to facilitate development at the Parks and raise revenue.

These alleged breaches happened after the citizens’ oversight power of the State Parks Board was gutted.

Ducey asked to heal the agency

The letter asks Ducey to “heal the agency, its staff, the State Parks Board, and concerned citizens who care about our natural, cultural, and historic resources.”

He can make this a priority in his second term under the banner of fixing somebody else’s mistake.

After all, the evisceration of the Parks Board in 2012 and the loss of the Parks’ Heritage funding in 2010 both happened before Ducey took office.

What’s more, reversing those changes is a matter of simple fairness.

Why do some outdoor groups get preference?

The so-called “rod and gun” constituency that relies on Game and Fish for their sport has a strong voice in the Legislature – and that’s why that agency retained both citizens’ oversight and Heritage funding. But State Parks have a statewide constituency that, while not as organized, should not be ignored. Hiking, boating, fishing, birding and exploring Native American culture. You can do that and more at these Arizona State Parks. Parks serve an essential role in an increasingly urban Arizona, providing outdoor recreation for everyone and bringing tourism to rural areas.

The State Parks are a vast treasure house of Arizona’s past and present, ranging from the Yuma Territorial Prison to the Boyce Thompson Arboretum to Lake Havasu to Kartchner Caverns to the ancient ruins at Homolovi. Properly protecting and managing this heritage demands a dedicated funding source and good citizen oversight.

How Ducey can make this right

Sure. Sue Black was Ducey’s appointment. That was his mistake.

Ducey can begin fixing those problems and answer the letter from his constituents as he crafts his State of the State speech. He can do it with a pledge to restore the Parks’ share of Heritage Fund money and reinvigorate the Parks Board.

Then he can shepherd those changes through a Legislature that will be more diverse next session and more in need of visionary leadership.