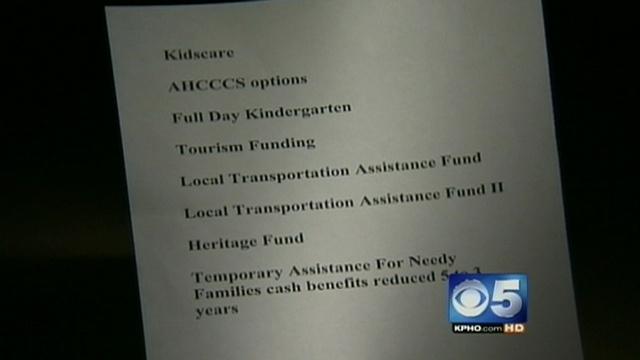 [Source: Sarah Buduson, KPHO TV] — The Arizona package of budget bills signed by Gov. Jan Brewer on March 18 permanently eliminates more than half a dozen state programs, including a program for uninsured children and a state parks preservation fund.

KidsCare is a program that provides health insurance for children of the working poor.  Under the new budget, the program has been eliminated and the 38,000 children who are currently enrolled will no longer have health insurance, according to Monica Coury, Intergovernmental Relations Assistant Director for AHCCCS.  “Our concern is that would mean more emergency room visits in hospitals and things that might have otherwise been avoided with routine medical care,” she said.  Coury also said eliminating KidsCare means Arizona will be the only state in the country that does not have a program for uninsured children.

The FY10-11 Arizona budget also eliminates the state parks’ share of the Heritage Fund. The voter initiated fund used money from the state lottery to preserve parks, trails and historical sites as well as build ballparks and soccer fields, according to Janice Miano, a member of the Arizona Heritage Alliance, a group that fought to preserve the fund.  “All the things that make Arizona a unique place — where people want to visit and to live — it’s gone,” she said.  [Note: To read he full article and view the video, click here.]

[Source: Janice Miano, Director of Administration, Arizona Heritage Alliance] — In 1990, the voters of Arizona, through a voter-initiative, created the Heritage Fund to protect and conserve our state’s wildlife, natural, and historic resources.  The vision of children playing on new swings in new parks; the reintroduction of endangered species into our state; historic buildings restored to their former glory and new uses; the acquisition of open space and critical environmental habitat; all of these programs and more have become a reality because of the creation of the Heritage Fund.

Since the beginning over $338.5 million have been directed towards the saving and expanding of Arizona’s environmental, cultural, and historical resources.  In addition, millions of dollars in matching grant money and the re-investment in our natural and cultural resources have brought economic and environmental benefits into almost every community in our state.

Money for the Heritage Fund comes from the Arizona Lottery — up to $20 million in annual lottery revenue is divided evenly between the Arizona Game and Fish Department and Arizona State Parks.

This legislative session was going well with the Lottery reauthorized via Senate Bill 1004 and signed into law by Governor Brewer on February 9.  This bill stated that the Arizona Lottery would be reauthorized with all its beneficiaries intact.

You have all seen those warm and fuzzy commercials on TV and in the newspaper telling us of all the wonderful projects the Arizona Lottery supports?  It’s called How The Money Helps on the Arizona Lottery’s website.  However, how does the money help now?  Well, it doesn’t help anymore.  The Arizona State Parks Heritage Fund is DEAD, FINI, KAPUT – killed by Governor Brewer’s stroke of her pen on March 18 with Budget Reconciliation Bill HB2012.

Do you still want to buy Lottery tickets? Remember the Heritage Fund was created by the voters of Arizona and the original statute (ARS 41-502 and ARS 17-297) said, “In no event shall any monies in the fund revert to the state general fund…”

Along with Governor Brewer, please remember these names.

In 2007, the Morrison Institute said, “The Heritage Fund stands out in part because of the diversity of programs it supports.”  The Arizona Heritage Fund has supplied valuable programs and resources for the residents of Arizona and those who visit the state.  The economic, environmental, education, tourism, and quality of life benefits that result from the Heritage Fund are too important to the citizens of Arizona to be lost!

The Arizona Game & Fish Heritage Fund is still intact — but for how long?