presentation on its website kicking off the 2nd phase of public input for establishing and maintaining a discretionary, dedicated funding source for public awareness and education. The Arizona Game and Fish Commission recently directed the Department to analyze ideas submitted by the public: the addition of a big game bonus point option, and the potential to expand revenue sources from non-traditional customers.The public is invited to view the online presentation, then submit comments specific only to the proposals via email (ideas@azgfd.gov) throughout a public input period that ends Nov. 18.

AZGFD is also seeking feedback to specific questions at Answer Questions HERE regarding a big game bonus point option. This feedback will provide the Department with a preliminary glimpse of public opinion on the topic. Additional analyses and public vetting will be needed to fully assess the potential for this option. The presentation and online feedback form also are posted at https://www.azgfd.com/agency/dedicated-funding-source/.

AZGFD will present feedback on the potential options for the funding source to the Commission at its public meeting Dec. 7 in Phoenix. 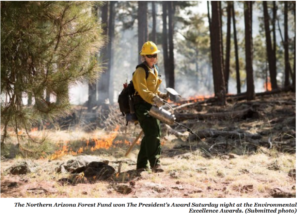 Sustainability Champion and Waste Reduction – made their debuts. Northern Arizona national forests provide the majority of water to the Salt and Verde rivers and eventually into the homes of millions of Phoenix-area residents.

The Arizona Pure Water Brew Challenge overturned a long-standing legal prohibition against potable water reuse. It also used craft beer to educate the public about the benefits of the “toilet to tap” revolution, the release stated. The team took to festivals, conferences, parades and expos to get their message out, which resulted in changing a law.

“I’ve attended the Environmental Excellence Awards as an Arizona Forward member for 20 years, and this year’s finalists show how far sustainability has come during that time,” stated Lori Singleton, Arizona Forward president and CEO. “Every year, we see a wider range of entries that make our communities healthier, more vibrant and more resilient.”

Finalist projects were submitted by Maricopa and Pima counties, as well as Chandler, Flagstaff, Glendale, Peoria, Phoenix, Mesa, Tempe, Tolleson and Tucson. “The results of this year’s competition reflect visionary efforts in both the public and private sector,” said lead judge John Flicker, who serves as president of Prescott College. “The judging panel had the diverse knowledge to evaluate how these projects will impact their communities well into the future. It was an honor for us to be part of this process.”

In addition to the Northern Arizona Forest Fund and the Arizona Pure Water Brew Challenge, Crescordia winners include:

The Ocotillo Restaurant features desert-adaptive materials and water-harvesting elements that blend into the Southwest. Desert palo brea and mesquite trees provide shade, while the restaurant’s namesake ocotillo plants are featured at key locations. A sunken lawn provides a gathering place and harvests water.

U-Haul designated a portion of customer contributions in 2017-18 to the National Forest Foundation to support its Prescott Aspen Restoration Project in the Prescott National Forest. One-hundred-fifty acres across two aspen stands were restored, protecting a watershed.

The city of Peoria’s new Patrol Services Building provides an immediate return on investment through ongoing water and energy reduction while providing a comfortable work environment for Peoria’s officers and staff. The building’s energy costs will be 41 percent less than a typical building, and it is tracking LEED Gold certification.

Phoenix Mayor Greg Stanton worked to establish Phoenix as an oasis of pragmatic, economically beneficial environmentalism. He asked Phoenix voters to approve a tax increase to benefit mass transit while running for his own re-election, while also converting 100,000 Phoenix streetlights to efficient LED bulbs. Mr. Stanton was also instrumental in developing public-private circular economy partnership through ASU to raise landfill diversion to 30 percent.

RISN Incubator – A partnership between the City of Phoenix and ASU

Submitted by: The Nature Conservancy

Submitted by: City of Phoenix Parks and Recreation Department

Submitted by: City of Tempe

Submitted by: City of Phoenix Parks and Recreation

“Up in the Air” an Air Pollution Education Program

Submitted by: Waste Management of Arizona

Submitted by: The Nature Conservancy (TNC)