[Source: Brandon Loomis, The Arizona Republic] – SELIGMAN — At 2 in the morning, you start seeing things in the path of the spotlight.

A shrub that appears to move. A pair of red eyes that quicken the pulse until you realize they belong to a common rabbit. Anything, it seems, but the green glow from the eyes of one of the world’s rarest mammals.

Then, “Ferret!” someone in the truck shouts. Brakes lock and tires slide on the dirt road.

You can’t make out its shape in the distance, but the telltale green reflection from a black-footed ferret’s eyes give it away. And, in this case, rather than freezing or running, the weasel bobs playfully as it inspects the intruders.

Every spring, the Arizona Game and Fish Department seeks the nocturnal predators with an army of spotlighting volunteers who count and vaccinate the endangered black-footed ferret, the only American species, which was once on the brink of extinction.

The collapse of prairie-dog towns from poison and the plow nearly wiped out ferrets in the past century. But, 17 years ago, they were transplanted from captivity into prairie-dog towns throughout the West because they dine almost exclusively on the destructive rodents. Now, under protections for both predator and prey, ferrets are thriving here like nowhere else.

Searchers are never skunked in scrubby Aubrey Valley, about 30 miles northwest of Seligman. March 29, the second of six outings planned for this year, was no exception.

“We hit new records every year, so it’s quite exciting,” wildlife technician and veteran spotlighter Heather Heimann told volunteers before the hunt. Then, she told them that any fingers that they’d like to keep should be kept away from trapped ferrets and to expect the animals to deploy some smelly defenses.

“I call it endangered-species pee,” Heimann said. “A bonus.”

Arizona’s ferret-recovery zone, in the northwestern part of the state, has proved a pleasant surprise to federal wildlife managers. It is one of just a few colonies where the ferrets are self-sustaining.

The search leads to captures so that the animals can be counted and vaccinated against canine distemper. If one of these silky, black-masked ferrets is trapped for the first time, an electronic ID chip is inserted in the nape of its neck. The animal is gassed with a sedative, first while inside a capture tube and then through a mask.

Volunteers come from all over Arizona and beyond, and there’s always someone who went to great pains to be there. This time it was Neil Edwards of Swansea, Wales. He and his wife re-arranged their Grand Canyon vacation to co-incide with the spring trapping.

“I’m a keen bird-watcher in the U.K.,” he said, “but also animals. Whenever I go on holiday, I study up on animals in the area.”

At 2 a.m. last Saturday, he got a special thrill when he walked toward a 2-foot-long ferret and watched it disappear down a burrow. About 60 people helped search dirt roads for the animals that night, and he was in a group of seven.

They approached and placed a wire-cage trap with spring-loaded door into the hole. They covered it with a burlap sack to block light, presenting the ferret with the illusion that the exit was now a few feet higher.

Then, they placed Big Gulp cups over other potentially connected holes, leaving the ferret only one way out. They marked the spot on a global-positioning system and left, planning to return within an hour to ensure that their quarry wouldn’t spend too much time exposed to the cold.

Volunteers in each of the past couple of years have found more than 100 ferrets in Aubrey Valley. The U.S. Fish and Wildlife Service estimates there are about 500 ferrets in 20 reintroduction sites from northern Mexico to the Dakotas.

In three nights, volunteers captured 28 ferrets. That would be low by recent standards if it held as the yearly count, but Game and Fish expects a second round of trapping this month will greatly increase the total.

“Last year, we were probably the most successful site in the country,” said Jennifer Cordova, Arizona Game and Fish’s ferret-program supervisor. “Others, unfortunately, plagued out.”

She referred to the same black-death plague that terrorized Europe in the 14th century. Antibiotics and other defenses minimize the threat to people, though rare deaths still occur.

But the insect-borne disease can wipe out ferrets as well as the prairie dogs they eat. The illness is relatively new to North America, having first arrived in California around 1900. It’s unclear why it hasn’t struck the Aubrey Valley, but it has devastated other recovery areas.

It’s possible to slow plague by dusting animal burrows with flea killer, but that’s expensive and time-consuming. Plague vaccines can’t be administered without a veterinarian present, which is also expensive. The state’s program, funded through the federal government and a match with Lottery proceeds in the Heritage Fund, is $200,000.

In the 19th and 20th centuries, massive swaths of ferret habitats in the western Great Plains were plowed under, and ranchers who worried about competition for grass poisoned many of the prairie dogs that remained.

Ferrets were absent from Arizona for 65 years before being reintroduced in 1996. They were thought to be extinct until a colony was discovered in Meeteetse, Wyo., in 1981.

Disease killed all but 18 animals in the mid-1980s, and the government trapped those for captive breeding. Several zoos, including the Phoenix Zoo, and a U.S. Fish and Wildlife Service center in northern Colorado help maintain a captive population of 300, some of which were conditioned for release.

“I was on the project in ’99,” Cordova said, “and we’d go out spotlighting and maybe find one ferret.”

The government’s goal is to have 3,000 adult ferrets in 12 states, with at least 10 populations exceeding 100, said Pete Gober, ferret-recovery coordinator for the U.S. Fish and Wildlife Service.

Sixteen-year-old Texan Molly Campbell traveled from Fort Worth for the roundup. With her headlamp shining onto a caged ferret that she was preparing to return to the wild, she said she came to make a difference and maybe preview a career.

Her uncle Ed Newcomer, a Fish and Wildlife Service special agent from Los Angeles, accompanied her. They ended up catching the same ferret two nights in a row — something one researcher is counting on during these events, to help chart ferret movements.

Volunteers who trap a ferret that has never been tagged and cataloged get to pick the name that biologists will call it each time it’s caught. Campbell and Newcomer named theirs Ed the Fed.

[Source: Kyle Mittan, Tucson Weekly] – It looks as if the chance to restore Heritage Fund dollars to state parks and transit services is dead for the year. 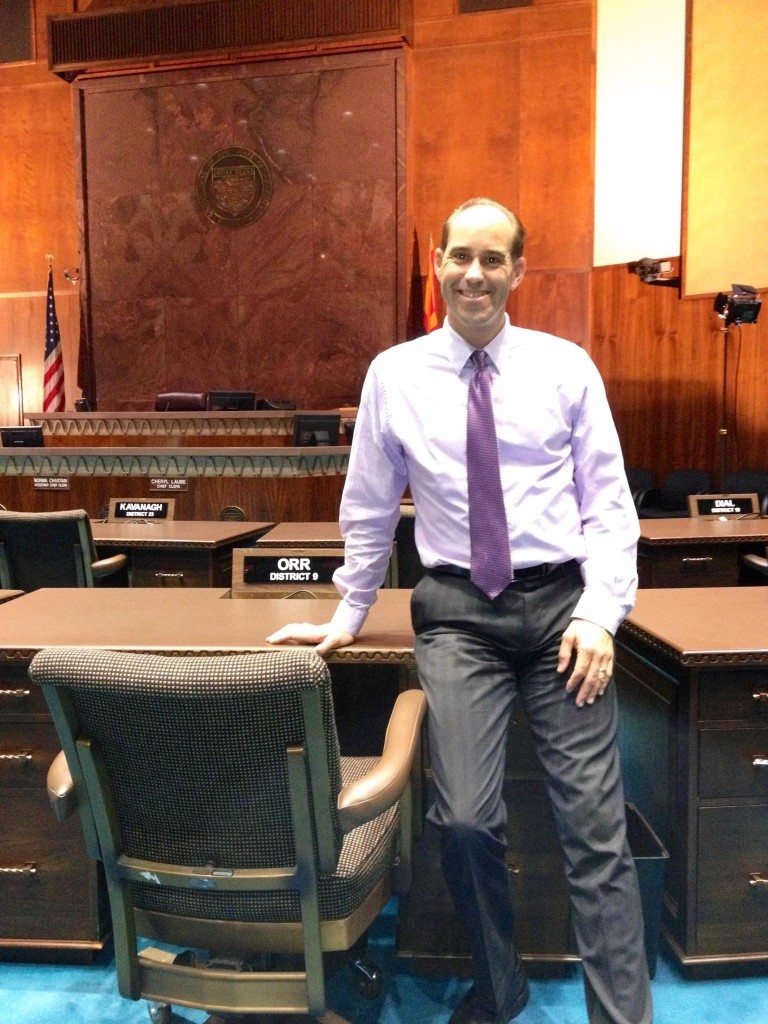 Although the bill failed to get past the Appropriations Committee, Orr said he planned to bring the bill back next year. Orr added that he has had a close working relationship with Arizona State Parks Executive Director Bryan Martyn, who also has an “excellent 20-year vision” for the maintenance and preservation of Arizona’s state parks.

Orr said that the state parks are important on a number of levels, specifically in terms of state economics and preserving the history of Arizona. “Strictly from an economical standpoint, they’re key drivers for our rural communities,” he said. “And they’re part of our heritage; they’re part of celebrating what’s beautiful in Arizona.”

[Source: Bryan Martyn, Camp Verde Bugle] – As many of you know, our 28 Arizona State Parks are all open and still attracting more than 2.2 million visitors to Arizona. Even with high gas prices slowing campers in the rural western states, especially those with RV’s, State Parks’ visitation is holding steady.

Because Arizona State Parks is treated like a business, we have had to reduce a few hours, make some parks seasonal, and have increased our reliance on communities and Friend’s Groups. Not surprisingly, we’ve seen an increase in our revenues and a decrease in our operational costs. The winds of positive change are definitely blowing our way.

The support we see every day from the public is stronger than it has ever been. I believe the aggressive efforts by the residents and visitors to protect the system of Arizona’s State Parks reflects the sentiments of the majority of Arizona’s residents.

Today, I’m inviting every Arizonan to get out and enjoy their Parks. The weather is perfect throughout the state. Arizona State Parks has a new program called “Family Camping.” This program shows how easy and affordable camping can be. We give you a tent and fishing poles to use, and we even show you how to set up the tent and set your hook. We are “Camping Central” for campers looking for information. Call us during the week or check out our website 24 hours a day for ideas, camping tips and maps.

One of Arizona State Park’s best qualities is our flush toilets, hot showers and easy access. Every one of our Parks is handicap accessible and a compact car won’t have any trouble…as our roads are paved. Campers will be surprised to find upgraded areas like white sand on the Colorado River park beaches, huge shade trees and new campground loops.

The skills of our Rangers to manage volunteers and projects that enhance the Parks are one of our greatest assets. Our Rangers are experts at their Park and many of them are law enforcement officers. Our Parks are safe, convenient, affordable and provide untold opportunities to develop memories that last a lifetime.

See you at the Parks! Bryan Martyn is the Executive Director of Arizona State Parks.