[Source: Steve Bodinet, NewsChannel 3] — State budget cuts have already forced three of Arizona’s 27 state parks to close.  Fourteen others have cut back their hours.  Due to the budget crisis, Arizona could soon be the only state without a state park system.  [Note: View the news report at Arizona budget cuts could doom state parks.] 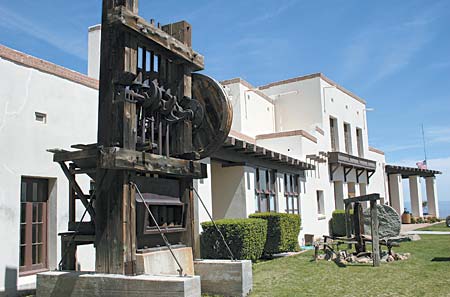 [Source: Philip Wright, Camp Verde Bugle] — If passed, House Bill 2001 would just about kill any hope that the Douglas Mansion in Jerome State Historic Park will reopen within the foreseeable future.  In spite of work continuing on the stabilization project to the mansion, the current news reports regarding the budgets for conservation funds, including State Parks, predict that most, if not all, state parks in Arizona may be forced to close.

Although the state parks board originally targeted Jerome State Historic Park for closure due to budget constraints, when it finally closed – suddenly – on Feb. 26, the parks board gave “maintenance and repairs” as the reason.   Tom Pitts, president of the Jerome Chamber of Commerce, said in a recent interview, “When they shut it down, that was the excuse. Most of us thought it was a ploy.”

Pitts, along with the chamber, the Jerome Historical Society and officials at town hall, were all surprised when the park closed so suddenly.  Most people involved locally assumed that the town would have time to come up with some proposals of its own to help keep the park open.  Pitts had put together a petition of more than 3,000 signatures of Arizona residents.  He included with the petition a fact sheet based on a 2007 study by Northern Arizona University on the economic impact of Arizona’s state parks.  [Note: To read the full article, visit News not promising for Jerome (Arizona) State Park.]

[Source: Arizona Republic editorial board] — What’s on the list and under the tree for 2009?… Rubber bands and chewing gum. There isn’t much else to hold Arizona State Parks together after state budget cuts and sweeps wiped out so much of its funding.