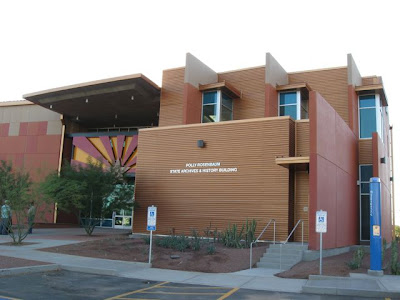 [Source: Ray Stern, Phoenix New Times] — The new, $29 million Polly Rosenbaum State Archives and History Building Reading Room that opened late last year has closed until further notice — another victim of state budget cuts.  “I’m hoping something is going to happen so that we can re-open it,” says GladysAnn Wells, state librarian and director of the Arizona State Library, Archives, and Public Records.

Stuck for years in a cramped space at the State Capitol, the new facility at 19th Avenue and Madison Street pleased state workers and visitors alike with “50 times more room” for reading and research, according to a November 30, 2008 Cronkite New Service article.  Wells says the facility had been seeing about 10 to 25 visitors a day, but now will be available only for research “emergencies.”  The state agency’s Law and Research Library Divison, the “primary legal resource” for state officials, will remain open on reduced hours — from 11 a.m. to 3 p.m., Wells says. [Note: To read the full article, click here.]